Whenever I read those two words I instantly start humming the well-known theme music and having visions of Ethan Hunt swinging perilously above the floor of the CIA Headquarters in Langley, Virginia.

So what brought this up you may be wondering, well sometimes I feel like things that God has asked me to do are exactly that – Mission Impossible.  In my mind I start making plans that involve trapeze wire and a team of highly trained masterminds to enable me to accomplish the task ahead.

It’s not the first time (nor I dare say will it be the last) that God has given me a mission that is beyond my capabilities or resources.

When we travelled to Europe doing missions with the band, The Friendly’s, we never had any money to pay for the airfares and yet after a lot of prayer, faith and hard work raising awareness and support for our mission, the Lord always provided exactly the amount that was needed to pay for our airfares and extra luggage costs that always accompany a touring band.

The years of being caregiver for Mark were pretty much Mission Impossible but as I undertook the everyday tasks involved, God gave me the supernatural strength to keep on going.

There are many days when raising my daughters feels like Mission Impossible, but the bible says God gives wisdom to those who ask* making yet another assignment possible.

So you might be wondering what my ‘mission’ that seems impossible is at the moment, well it’s getting my book finished.  It was all very well and good writing it, but now we have to tidy it up, get a copy editor to fix it up, find a title that works and work on the cover.  Not to mention figuring our way around all the computer stuff involved in publishing an Ebook.  (Don’t even know what that is called so we will call it computer stuff for today.)

But seeing as I have been in this spot before, I do have some idea what I need to do, and that is: do the possible so that our incredible amazing God can do the impossible.

I love the story of Peter’s escape from prison found in the Bible in the book of Acts chapter 12.  Peter, a disciple of Jesus although by the extra security around him you would have thought he was some dangerous criminal, was in chains sound asleep awaiting trial the next morning for preaching about the resurrected Jesus.  Like an epic movie scene a bright light appeared in the cell and there stood an angel of the Lord. Apparently the dramatic entrance was not enough to wake Peter so the angel hit him in the side and yelled, “Quick, get up!”  Unbelievably the chains around Peter’s wrist fell off, then the angel instructed Peter to get dressed, put on his sandals, put on his cloak and follow him.  Peter dutifully obeyed thinking he was having an awesome dream and the angel led him out of the cell, passed all the guards, even the two that were beside Peter, through one gate and then another gate right up to the big iron gates that opened to the city.  Peter followed the angel out and then the angel vanished and it says in verse 11, “Peter finally came to his senses. “It’s really true!” he said. “The Lord has sent his angel and saved me from Herod…”

Now what I always noticed about this amazing story was that Peter had to do the possible; he had to get up, put on his shoes, clothes and cloak and he had to move his legs and walk.  The angel did not miraculously dress him or carry him but the angel of the Lord did do the impossible.  He was Peter’s very own highly trained team because he appeared in a locked and secure prison, made the chains around Peters wrist fall off (didn’t even have to pick the lock – so cool!) and somehow blinded all the guards and then opened all the impenetrable gates.

Peter did the possible and the angel of the Lord did the impossible.

This is the plan for everything that Jesus puts on our hearts and gives us the passion to do.  We must do the possible – so I must write the book! God has already provided a small team of incredible and talented people to aid this mission and between us we must organise and figure out scary websites so that God can do the impossible by guiding us through the websites and giving us the creativity and inspiration we need and ultimately use the book to encourage others in their own journey through life and the trials that can come.

When we were organising the band’s tours and missions trips we had to do the possible of praying, believing in faith, raising support, booking plane tickets and packing, and then God did the impossible and paid the airfares. 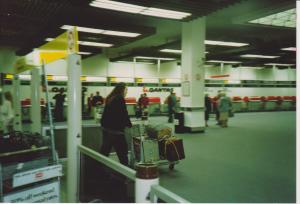 It’s all about taking the possible steps.

So this is to encourage all you wonderful folk out there to do the possible to reach your dreams and desires that God has put on your heart, have the faith to believe, and then sit back and watch God do the impossible.

As the voice from the little box that will self-destruct in five seconds says, “your mission should you choose to accept it….”

Choose to accept it!!! It is truly an exciting way to live!!!

Jesus looked at them and said, “With man this is impossible,
but with God all things are possible.”
Matthew 19:26 New International Version (NIV)
Faith is the confidence that what we hope for will actually happen;
it gives us assurance about things we cannot see.
Hebrews 11:1 New Living Translation (NLT)
* If you need wisdom, ask our generous God, and he will give it to you.
James 1:5 New Living Translation (NLT)

Mark and his darling daughters.