Hey all,
Happy New Year!! I hope 2015 is full of blessings for you all!
So what have I been up too…   Well on the 23rd of December we finally got my book on Amazon.  God is amazing and with His divine help, guidance and bringing all the right people along the book is a reality.
So here’s all the information for those of you who are interested in reading my story. 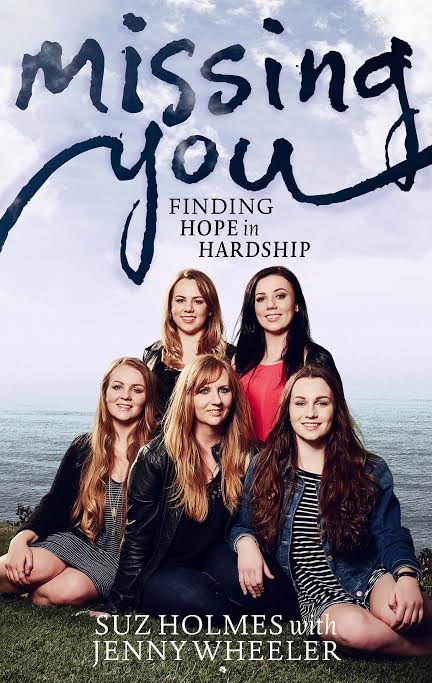 Now you can get the background story, and how her relationship with God, our Saviour, endured and was ultimately fortified in her book, Missing You, Finding Hope in Hardship.

For those of you who know Suz and knew Mark and her during the ten years of cancer and illness, this is the behind-the-scenes peek at what you possibly never knew was going on.

Suz has used her personal journal to write her story, Missing You.  In which her prayer is that you will discover that God can be trusted to care for and protect you in your greatest battles and everyday.

MISSING YOU – Finding Hope in Hardship

Suz and Mark Holmes had been married ten happy years and had four little daughters when at 30 Mark was diagnosed with a terminal brain tumor.

Suz dodges no bullets in telling the story of the family’s next ten challenging years, holding tight on a traumatic roller coaster ride towards widowhood.

As one of the founding team for Houston-based Christian MXTV, and the subject of several faith-based TV documentaries, Suz and Mark’s story has already inspired many facing grief and loss.

In Missing You, like her soulmate Job, Suz looks her God full in the face and with rare honesty demands answers. She allows us to eavesdrop on an intimate exchange where pride and face-saving have no place.

What emerges is a redemptive story that denies Cancer the Last Word.

You can buy Missing You here

For those of you who do not have a Kindle, you can download an App for you device FREE here, follow the instructions on Amazon and you’ll be up and reading in no time.

Hey all,  I am so excited as we have a guest writer for the blog this week.  I’d like to introduce David Holmes. Yes, as you might of guessed by the last name we are related.  This is my amazing father in law!  David has an amazing testimony and is a gifted writer.  I know you will enjoy his insights.

One of my clearest childhood memories concerns an incident in my life that took place just before Christmas 1948. Every Sunday my mother would take my younger sister and I to church. This particular Sunday, on a singularly cold Yorkshire winter’s morning, my mother was striding determinedly on towards the church pushing a pram in which my sister was happily enjoying the view of the crisp snow from her snug and comfortable position. By contrast I was reluctantly being almost dragged along by my mother, clutching my most favourite toy, a shiny bright red toy railway engine, with wheels that actually went round.

Why the reluctance? Our church was collecting toys as gifts for local orphanage children who might otherwise have no joy on Christmas day. A most worthwhile and noble cause.

All well and good I thought, but why me? Or more particularly, why my very best toy, the one toy I couldn’t possibly live without? I had offered up alternatives: my fourth best toy: a stuffed giraffe with one ear missing (victim of a practice surgical operation that had gone wrong) and a wooden racing car that still had three wheels. I had even offered to donate my little sister. But all these eminently sensible alternatives had been peremptorily rejected by my mother who, I’m sure, was determined that I benefit from learning the noble Christian ethic that it is better to give than to receive.

I don’t recall learning that lesson then, instead I formed a (thankfully short-lived) resentment of orphans, and ever since that day the sight of a shiny red railway engine prods a nostalgic nerve in my psyche. Thomas, of course, doesn’t count – he’s blue.

Move forward through sixty five years of life; school, university, marriage, children, grandchildren, overseas missions, several diverse working careers living in four different countries. Now my bride of fifty years and I use our retirement to be involved in a mission team that moves around the country building and renovating youth camps and churches that can’t afford the cost of the labour involved in much needed renovation or new facilities.

Its just after Christmas, I’m lying on my back on a hard wooden bottom bunk sanding off the underneath of the top bunk with a heavy, rackety orbital sander. Its very noisy in the confined space, I’m creating dust that would rival a sandstorm in the Sahara desert, its hot and sweaty work and my arms feel as if they are about to fall off. And its no consolation that I have completed eight of these bunks – because there’s another forty to go. To relieve the tedium of the job I start to pray. I don’t do that often on these jobs because, being a man, multitasking doesn’t come naturally, and the intellectual effort required to properly execute my building tasks usually precludes the ability to think of anything else – let alone converse with my saviour God.

But this sanding task, as well as being interminably tiring and dirty, is incredibly mindless. So prayer is a welcome parallel pastime. Most of my prayers start with thanks. I have a great deal to thank God for, this day, my life, my salvation. I start to think about the job I’m doing – can I really thank Him for this tiring discomfort? And then I’m reminded of my reluctant sacrifice of the best red fire engine in the world to some orphan that I would never even know.

And then I got it.

It is better to give than to receive. 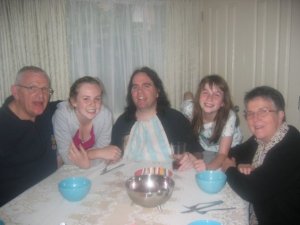 I thought about the tumultuous gaggle of ten year olds on a school camp who would use this freshly painted bunk room in the next week. They would have a ball; the camp is a great amenity; swimming pool, gymnasium, playing fields, great food and excellent facilities. And a passionate, dedicated, caring staff who do all they can to improve and enhance the lives of their young charges. And because of what our team was doing in renovating the bunk rooms, the experience those kids were about to have would be even greater. But even better than that the kids would be totally oblivious to the work that was now going on, they wouldn’t give the freshly painted bunks a second thought – but their experience would be so much the better for it. It seemed to exactly define the reason and reward for what we were doing. What a privilege.

It wouldn’t surprise me if Jesus thought along those lines as he suffered, and then died that we might live. Most of us don’t give that a second thought either, but without His sacrifice our lives wouldn’t even be worth living.

It is so very much better to give than to receive.

You should remember the words of the Lord Jesus: ‘It is more blessed to give than to receive.’
Acts 20:35 New Living Translation

Father in law of Suz Holmes

Grandad of the girls 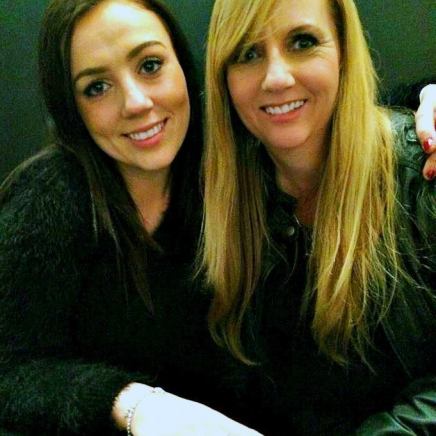