If we’re not friends on Facebook and you didn’t hear – I was fully funded for my outreach!!! Thank you again to everyone who helped make this possible. I am beyond grateful. God is such a faithful provider and your generosity showed me this. THANK YOU!!

I am writing to you from Ireland!

I am absolutely loving it here.

We have jumped straight into it and started plugging into churches, homeless ministries, doing projects to help different christian ministries with the renovation of their buildings and, street evangelism.

There are so many homeless people in this city, at almost every corner there is a homeless person sitting and begging but we are finding that they are super open to talking – they’re just lonely. We talked to a guy that opened up about having depression and just feeling totally hopeless. We got to tell him that there is a God who loves him and we got to pray for him! It was so awesome. His name is Kevin – send up quick prayer for his salvation!

Praying for people on the streets in Dublin

We also get to help out at this amazing homeless ministry called Lighthouse.

It is such a blessed ministry and sees so much fruit – it is so cool we get the opportunity to serve there. I got to hang out with a homeless couple, Dan and Jenny for about an hour and a half. They opened up to me that they were both heroin addicts and I just got to sit and listen and chat with them. It was so amazing. They told me that at all the other food shelters they’ve been to, they always felt judged and like no one valued them or even wanted to talk to them. They said that at Lighthouse they always feel loved and valued – so in other words, they can see Jesus in us! I so believe that God is moving in their lives and I am excited to get to know them more.

PLEASE pray for them as Jenny is starting Teen Challenge, a Christian rehabilitation center and Dan is going to a different treatment center in about a week. Pray for the power of God to move in their lives and that they would be healed from all addiction and more importantly, know that God loves them and has a plan for them. 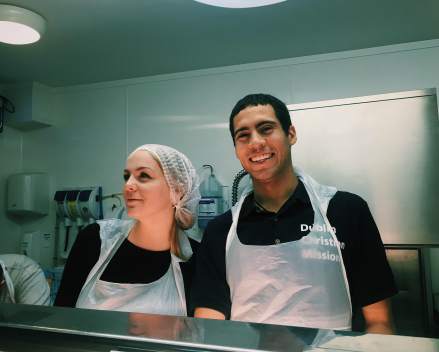 Feeding the homeless , and looking fab in a hair net.

It is seriously such a blessing to be here. I have found it pretty stretching as a leader but I feel the Lord guiding me all throughout the day, which is such a beautiful thing. I have never done something so challenging and rewarding. I feel so close to Him and it gives me strength and courage as a leader when things get hectic. God is teaching me to have grace with my students as they are still learning and growing so much and this is a whole new thing for them.

My prayer is that God’s word would be so engraved on my heart that I would live and love out of a place of truly understanding the way God lives and loves.

I just want to be the woman that God wants me to be and in every stretching moment, I feel refinement happening – taking steps closer to understanding what it means to be a woman of peace and love. Praise God for the strength that truly only comes from Him. He is way too good.

– Pray for unity in my team – that we would show Christ by the way we love one another.

– Pray for me – for wisdom, humility and the Lord’s guidance. I want to lead like Jesus would.

– Pray that we would see tremendous fruit in the relationships we are building.

Thank you all for taking the time to read my updates – it means so much to me.

Please let me know how I can be praying for you.

It was early morning, so early in fact that it was still dark.  The city was quiet as the women made their way through the streets.  There was no small talk; in fact no words were spoken at all for fear of the tears flowing again.  Each one had had a headache for days because of the crying and the activity of walking had given them a much needed break.  In their hands were carefully prepared spices for the body.  Yes, the body.  The man they all loved so deeply was dead.

How could this be?  They could not even slightly wrap their heads around this.  But dead he was.  They had witnessed the horrific execution with their own eyes.

It was all so sudden, just days ago they were all hanging out, having dinner, laughing and yet as they remembered back they could now tell there had been a weariness about him.  Not that this ever stopped him pouring out his love and compassion – in fact just the opposite.  He had been so attentive, so kind.  Oh the pain – how could they have killed him!!

The worse was first thing in the morning, that first moment when your eyes open and for a split second you forget a loved one has died and then… then you remember and the heaviness that descends on your heart is unbelievable.

What had he ever done to deserve this? Their love for him cried out in utter pain.

For this man was truly remarkable.  He was like no other!

He had been brought up in the same time and country as them and so he had been surrounded by the culture that treated woman as nothing.

Now he was gone!  Dead!  Oh how that thought made them want to throw up because their stomach churned so violently.

As these thoughts circulated in their minds their steps got slower and not one of them noticed the dawn slowly arriving announcing another day.

Finally they arrived at the place where the tomb was.  Mary Magdalene’s steps grew faster; she who had been rescued and forgiven much had loved him so deeply.  She longed to do her last possible act of love, even though he would never know,  it would help her in her intense grief to give to him just one more time.

Mary (James mother), Joanna and the others had lost sight of her when they heard a scream.  All of them started running.  To their surprised the tomb was opened, the scream must have come from inside where Mary still must be.  Without slowing down they ran in and then they all suddenly stopped, their mouths dropped open and not one of them spoke for the longest time.

Where on earth was the body?  Was this some kind of sick joke?  Seriously hadn’t the religious leaders done enough – weren’t they satisfied he was dead.

As if things couldn’t get any more bizarre suddenly in front of them were two exquisitely beautiful men dressed in the most amazing dazzling robes.  Terrified the women fell to their knees and then one of them spoke and said “Why are you looking among the dead for someone who is alive? He isn’t here! He is risen from the dead! Remember what he told you back in Galilee,  that the Son of Man must be betrayed into the hands of sinful men and be crucified, and that he would rise again on the third day.” (Luke 24:5-7 (NLT))

Memories of those exact words came flooding back and as the realisation of what the angel had just said slowly sunk in, the pain, the heartache, the hopelessness faded away as joy, intense, explainable joy burst into their hearts and with it bringing hope – wonderful hope.

And hope for all women is restored through those three simple words.

So 9 am this morning my land line rings, that's weird for a start! Its my mum - She says to me, "I've decided I am going to call this the 'Courageous Virus' because it sounds way more positive and it's time for Christians to rise up and be courageous!" GO MUM! You are truly Brave Love! #bravelovewomen #bravelovewomennz #iambravelove 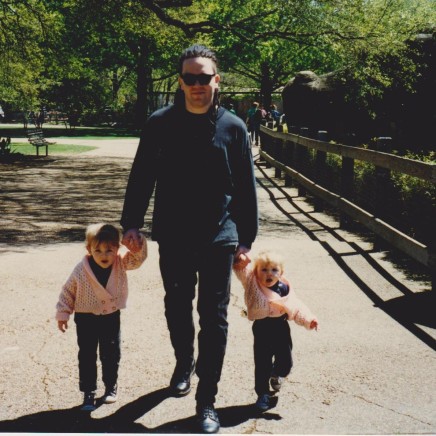 Mark and his darling daughters.

1992 -Leaving for Amsterdam after watching God do the impossible and make a way for us to serve him with Youth With A Mission
%d bloggers like this: